What it means to be an Inclusive Practice

I occasionally get questions about the Inclusive Practice graphic on my website, so I wanted to take a minute to explain it and highlight why I see this designation to be important. We're on the heels of Pride Month, after all. 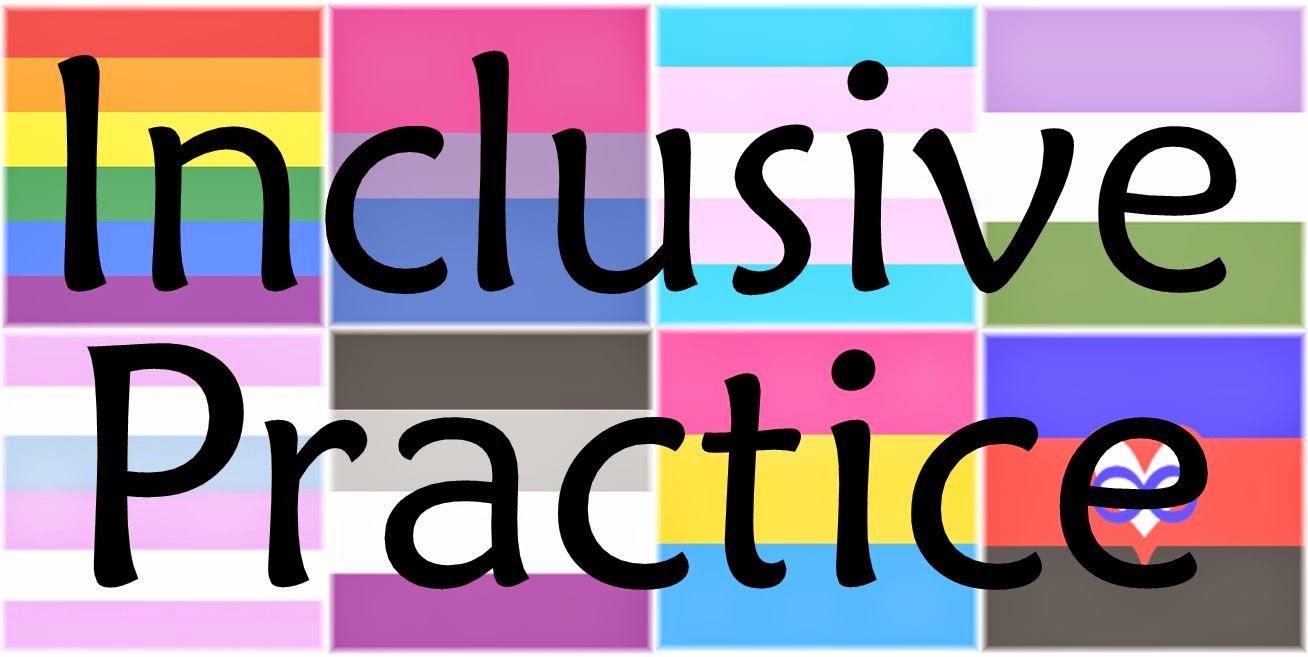 First off, what do all those color combinations mean?

Put simply, the above color combinations are the flags of the LGBTQIA community.  The most common flag associated with this community is the rainbow flag (left), though because many feel it to only designates gay and lesbian folks, other communities created flags with their own unique color combinations.

This flag represents bisexuality. These are people who feel romantic and/or sexual attraction to two genders. I have worked with many bisexual folks, and while it is not always relevant when they're in a heterosexual relationship, my clients feel they can comfortably disclose this intimate detail about themselves if they are aware that I am an LGBTQIA-friendly provider.

This flag represents the transgender community. A transgender person is a person whose gender differs from the gender they were assigned at birth. For example, a trans man may have been "DFAB", or designated female at birth. Many trans men can become pregnant and some choose to do so. Some nurse their babies and others choose not to or cannot. I am proud to be in a growing community of birth and lactation professionals that have educated ourselves on helping transgender folks meet their infant feeding goals.

This flag represents the genderqueer and non-binary community. Some folks do not identify with a specific gender, or their gender does not fit the typical man/woman binary. Non-binary folks often use gender neutral pronouns such as they/them. Many can become pregnant and give birth, so being knowledgeable about this community is a must for an inclusive birth and breastfeeding professional.

Speaking of non-binary folks, a pansexual is a person who experiences attraction to all genders. They dislike the term "bisexual" because of the implication that there are more than two genders. Again, this is not always a relevant issue for birth workers, but this community is important to include in your awareness base!

An intersex person is a person born with reproductive or sexual characteristics that do not fit the traditional male/female binary. Contrary to popular misconception, most intersex people are able to become pregnant, though modification surgeries to "assign" a sex during infancy often interferes with future fertility. Many if not most intersex people resent this cosmetic modification because they were not given a choice in the matter.

Asexuals are people who do not experience sexual attraction, or experience it very selectively. Many asexual people experience romantic attraction, and therefore do become pregnant and start families with the people they love.

The final flag is the only one that doesn't really "fit" in the LGBTQIA acronym, though it's relevant to doulas. Non-monogamous folks (also called polyamorous) have multiple romantic relationships with the knowledge and consent of everyone involved. A doula very often becomes acquainted with the intimate details of their clients lives, so being aware of diverse relationship dynamics is important. Especially if your client will be accompanied by more than one romantic partner!

In other words, this graphic is meant to signify that I have a great love and respect for diversity! Because no two families look alike, it is important to me to designate myself as an inclusive doula and lactation consultant. Indeed, I enjoy working with pregnant folks and their families regardless of sexuality, gender, or family structure. Additionally, I am committed to being aware and knowledgeable of the unique issues affecting each community.

For those who have asked, yes you are more than welcome to use the above graphic on your business page! I only ask that you educate yourself about each community and know that being an "inclusive provider" means committing to a lifetime of learning and never making assumptions. The experience of one person is not the experience of everyone within that demographic. The best practice is to listen first and echo language. If you're unsure, just ask! A few examples of questions you might ask:
Sadly, most doula trainings are severely lacking in these topics, so I'm providing some resources to help you educate yourself on the diverse family below:


And a few for your LGBTQIA clients and their families:


*Full disclosure: I am one of the lactation consultants at Peaceful Beginnings.
Posted by Efference Doula at 8:59 AM 3 comments:

IGT: What it is, what it isn't

It was the perfect storm: a complicated pregnancy, a high intervention labor, and then, on top of it all, she was having trouble breastfeeding. This already exhausted mother was at her wit's end, but I knew how committed she was to making it work.

I weighed her baby and examined her breasts. Baby's weight down. Very sleepy. Mom's breasts displaying the classic symptoms: wide spaced, tubular, no report of changes during pregnancy. I calmly told her I think she has insufficient glandular tissue (IGT), and she almost immediately burst into tears.

She could barely get her words out, but after a moment I realized she was crying not because of the diagnosis, but because of the validation. Someone somewhere, on a message board or what have you, had told her IGT isn't a real thing, that it's an excuse for women who don't want to put the work into breastfeeding. I shook my head and reaffirmed my previous statement: "Insufficient glandular tissue is very real." "Thank you," she said, and asked what to do about it.

Insufficient glandular tissue, or hypoplasia, is one of the leading causes of primary lactation failure (failure to produce enough milk even though the baby's latch and suck are normal). While severity of IGT varies from person to person, an estimated 1 in 1000 mothers have IGT severe enough to preclude a full milk supply despite "doing everything right."

Everyone develops the basis for functional breast tissue (milk sacks, ducts, etc) during the embryonic stage regardless of sex. During puberty, increased levels of estrogen cue the creation of extra fat, connective tissue, and some functional tissue. Pregnancy hormones ignite the proliferation of functional tissue: ducts, milk sacks, etc; by about the 16th week of pregnancy, the breast is a functioning gland.

Those with IGT, however, have experienced an interruption in this process. While the exact cause is unknown, it is believed that this interruption takes place during puberty, whereby the body fails to develop the basis for glandular tissue. Without this basis, the breasts cannot adequately create and release milk.

This is not to say they will not produce some milk. Many mothers with IGT have the ability to produce breastmilk, just in insufficient quantities to sustain their babies. Again, severity varies from person to person, and treatment plans will vary based on severity as well as infant patterns.

The "typical" hypoplastic breasts will be tubular instead of rounded. They may be widely spaced, one
may be larger than the other. Some display a marked swelling in the areola. This image shows varying breast shapes; note varying markers of hypoplasia in types 2-4:

Many young women note during their teenage years that their breasts don't "hang" the way they should. While this is not a definitive symptom of IGT, it is a good idea to discuss concerns with a lactation consultant during pregnancy, especially if you have experienced little or no breast changes during pregnancy.

It's not clear what, exactly, causes insufficient glandular tissue, but there are theories. Some experts believe genetic components may be at play. IGT expert Diana Cassar-Uhl suggests luteal phase defects may be a common cause: inadequate progesterone certainly could preclude the development of functional breast tissue. Others believe PCOS, obesity, a history of disordered eating, and other factors that alter hormone levels may prohibit sufficient development of glandular tissue.

IGT is a lot of things. A few things it is not:
Treatment and Support

Since no two mothers are alike, the care plans for IGT vary from person to person. Seeing a lactation consultant during pregnancy (yes, before baby is even born!) will help you understand whether or not your breasts appear hypoplastic and give you a plan of action for when the baby comes. Then the best idea is to monitor signs of adequate intake and commence treatment for IGT as soon as you notice a problem. This may include herbs, prescription drugs, supplementation, frequent weight checks, etc.

After receiving clinical care from a lactation consultant, the most important thing is to surround yourself with support! There are countless mothers out there with IGT; finding a community with shared experiences is key to staying positive and feeling good about yourself and your infant feeding decisions. noteveryonecanbreastfeed.com has an amazing resource list, and I definitely recommend checking out the IGT and Low Milk Supply Support group on Facebook.